Skip to content
Home/The History of the Samurai Sword
Previous

The History of the Samurai Sword

The sword emerged already very early in Japanese history. Legend has it that together with the jewels and the mirror, it represented the three imperial

treasures, which had been lent to the great-grandchild by the sun goddess Amaterasu as symbol for the legal standard of his rule and will. Later then in Japan the cult around the warrior class developed and the sword embodied the attitude of the Samurai to life and to the fight.
The victorious fight with the sword was not consequence of physical strength, but was based on perfect cooperating of spirit and body, to retard a sword blow in the last moment and to block an unexpected blow of the opponent delaylessly. The warrior had to be internally completely calm and relaxed. How someone dealt with his sword, was the result of a mental development process.

The history of the Samurai sword is closely connected with the history of Japan and arranged into the following phases:

After mythical tradition the first Japanese emperor Jimmu Tenno, a direct descendant of the sun goddess Amaterasu, started in prehistoric times from the island Kyushu in the south of the country over the inland lake to Kashiwara in the heart of Japan, in order to subjugate those there resident hostile trunks and to create so the Japanese empire. With its accession Japanese early history begins. Continental-asiatic culture in form of the Confucian faith teachings, the silk trade and the blank weapon forging art came to Japan in approximately the third Century A.D. It is therefore assumed that the technology, which led to the development of the Japanese sword, very probably originated from China and was brought over Korea to Japan. The oldest swords found in Japan were excavated from graves, which originated from the fourth and fifth century after Christi birth. These blade, which are called “chokuto”, are straight and have only one cut. Some of these swords were so thin that the blade bend, if one kept them parallel to the soil. Probably these blade were used only for ceremonies of purposes, weapons were it probably not. From these imitations of the Chinese type of sword the Japanese Samurai sword gradually developed in the course of the time. 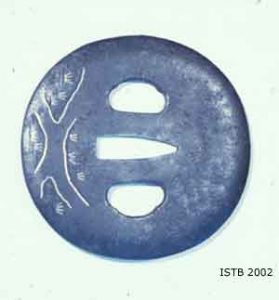 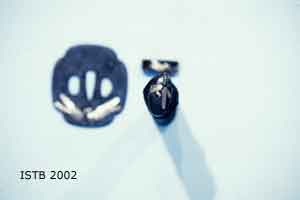 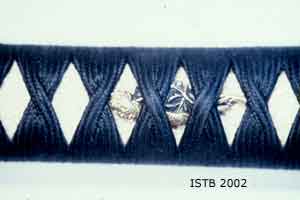 Up to Heian-period (794-1191), when the new capital in Kyoto was established, the Japanese had already very much improved on their imported steel working techniques. The swords, which originated from this period, can be called Japanese swords.
The warrior who used these blade fought as riders, therefore they needed blade which were suitable for the Katana cutting than for the stabbing. In these situations a curved blade was much more effective than a straight one. In addition the blade had to be long, but nevertheless so light that it could be held with one hand. Swords from this period had often narrow cuts of over 912 mm of length. They were carried hanging on the hip, whereby the cut showed downward. The swords from this period are called “tachi” and can be regarded as representative of the broad spectrum of antique swords from the time before the 17th Century. These swords are also known under the comprehensive term “Koto” (old swords). After the purge of the civil administration under the Fujiwara-clan in the second half of the Heian-period the new class of the Samurai emerged. Claims to power were regulated from now on in principle by martial actions. The war became something ordinary and the sword became the primary weapon of the Samurai, which was constantly carried. The art of the sword forging took a dramatic upswing during this time, and reached its high point in the production of Samurai swords in the second half of the Heian-period. The sword black smiths at that time produced with their simple tools almost perfect swords, those in their quality remained unsurpassed until today.

During the following Kamakura-period (1192 – 1336) Japan stood under the rule of the warrior class. Altogether 675 years of feudalism under military command followed. The Shogunat possessed unrestricted power into all ranges of life. At the end of the 13th Century, Mongols tried to invade Japan as continuation of their invasion in Europe. However they were struck back by the samurai, whom two suddenly arising taifunes came to assistance. Due to this national state of emergency new and better sword types were needed and so many sword black smiths turned to the production of approximately 30 cm long “short swords”, the “tanto”, which could be used well in close combat. At the same time the blade of the tachi became broader, thicker and heavier and was technically further developed.
After the Kamakura – period followed the jerky, by chaos and frequent wars shaped Muromachi – period (1337 – 1573).
At the beginning of this period the many different methods of sword production in Japan were grown together to the Gokaden, the so-called five traditions or schools. These schools were designated after the respective name of the province, in which they were resident:

the school of Soshu in Kamakura;

the school of Bizen (in today’s prefecture Okayama);

the school of Yamashiro in Kyoto;

the School of Yamato close to Nara;

the school of Mino (in the Prefecture Gifu).

During the Muromachi-period but also in the following centuries, most Japanese swords were assigned to one of these schools. The chaos and the constant wars between rivalling feudal lords led to a large demand for weapons. It finally came to a mass production and thereby connected with strong deductions of the quality of the made swords. In addition the violence and frequency of the fights led to the development of the “uchigatana”, a secondary blade, approx. 60 cm long, and carried with the cutting edge upward so that the pulling movement could directly turn into the sword stroke. These swords were particularly suitably for the fight in houses, where the tachi was in the way. 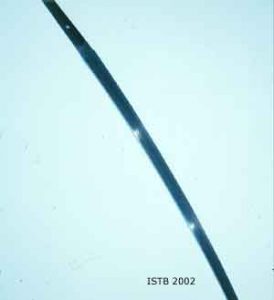 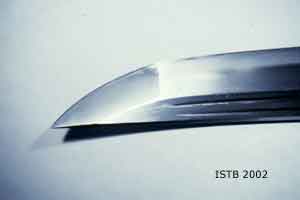 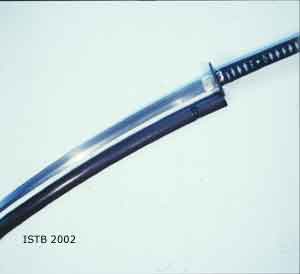 An important development, which took place approximately at the beginning of the Momoyama – period (1574 -1602), was the development of the uchigatana to a pair of swords, which could be carried at the belt. The longer one of the two swords was called “katana”, it was between 60 – 76 cm long. The accompanying sword, the “wakizashi”, was approximately 45 cm long.
Carrying these two swords became custom with the Samurai for long time and was indication of their rank. The broad hardness line at these blade let them appear more remarkable compared with the older tachi, also the steel seemed brighter and shinier. It could not be determinated any more from which of the five schools they originated, and therefore these swords became sometimes designated as blade from the sixth school, the Shinto – school.
Toward the end of the 16th Century the field lord Toyotomi Hideyoshi united the country and made finally an end with the blood pouring. In 1588 he issued a law, in which the farmers of the whole country the possession of swords was forbidden. Now that the sword possession was strictly limited and the country was in peacetime, the sword should become more insignificant as weapon and serve more than decoration and status symbol.
The following Edo – period started with the year 1603 with the establishment of the Shogunat by Tokugawa Ieyasu, the successor of Hideyoshi, this time was characterized by peace and self-selected isolation. Japan was hermetically cut off the foreign countries. 250 years persisted the relatively peaceful reign of the Tokugawa – clan. Their slowly descent started with the arrival of the American Commodore Perry and its black ships in the middle of the 19th Century and with this arrival also the opening of Japan to the foreign countries started. For a while the blade of the Edo- period were qualitatively much better compared with their predecessors from the mass production of the war years. However the used standard in the blade production could not be held because of economic decrease, national price control and corruption. 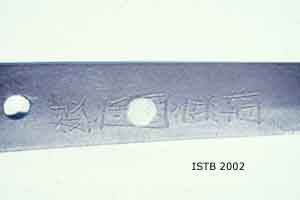 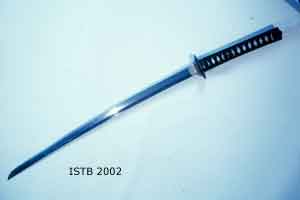 Emperor Meiji, the 122. descendant of the realm founder Jimmu Tenno, re-established 1868, after the case of the Tokugawa – Shogunat, the emperorship and began to reform the country fundamentally. During the Meiji – restoration Japan was modernized and opened more and more to the foreign countries. The reforms of the Meiji – period represented without doubt one of the most important sections in the history of Japan.
The feudalism was abolished, and together with this abolishment also the Samurai lost their privileges. It was now forbidden to carry a sword. The times for the sword black smiths were heavy, many were forced to give up their handicraft. However soon it came to an increasing acknowledgment of the sword as arts and crafts and this new movement was even stated by the emperor.So some black smiths could continue working and the tradition of their handicraft maintained. The swords (Gendaito) which have been manufactured since the Meiji – period were affected in high extent by Japanese military history. The Gendaito have the form of the traditional swords, but none of the characteristics of handforged blade; they have neither a hardness line nor an interesting surface texture.
The resumption of the sword production after that 2nd World War, and the seven-year-old sword manufacturing prohibition imposed by American occupying power, was connected with some difficulties. The sword forging Tsuka handicraft was regarded now as arts and crafts and no more than production possibility for war weapons. It was difficult to take up the handicraft again after long war – and occupation years because the knowledge and the expertise had been passed on frequently under largest secrecy and alone by verbal excessive quantity by the master to the pupil through generations. A lot of inestimable knowledge seemed to have been irreparably lost. However this difficult situation had the positive consequence that the sword black smiths co-operated and animated by mutual support and by large effort this lose-believed art again. The swords manufactured today in Japan are from so good quality that they can easily compete with the historical blade and one can say that the current period of the sword forging art is more creative and stronger than the periods in the last centuries. The today’s handicraft art sees two important tasks, the preservation of the traditional sword and the creation of a durable art for the modern times.